Symphonic Slam is a name familiar to fans of Progressive Rock music and has earned legendary status. The band's self-titled debut on A&M Records in 1976 became a much sought-after piece of mid-70's progressive rock on the strength of Timo's use of the '360 Systems Polyphonic Guitar Synthesizer'. Despite several CD re-issues Symphonic Slam remains a mystery to most who've enjoyed Timo Laine's incredible musical vision. Here for the first time is the full story...

This is the story of how an unknown band, that had never played in Toronto before, was able to get an internationally released album (in 12 countries) by a major label, A&M Records Canada, and then 3 months later sell out Massey Hall with Symphonic Slam being the only band on the bill.

Timo was the Record Producer, Songwriter, Singer, Lead Guitarist, and Polyphonic Guitar Synthesizer player. And was the only person involved from the very beginning, throughout it's entire history. He even created the artwork on some albums.

TIMO: “Symphonic Slam was an idea to create a huge soundscape with as few players as possible. The use of the polyphonic guitar synthesizer with six 'Oberheim' synths, along with keyboards, and drums was enough to achieve that goal”.

Timo Laine was born in Oulu, Finland in 1948. His family emigrated to California when he was six years old. Timo's father was a chemist with a strong interest in geology. He wanted to explore the Mohave Desert in California and Nevada. His father was also concerned about Finland sharing a border with the Soviet Union (now Russia), and the threat they imposed. After learning to speak English, Timo soon developed a life long interest in Music and Art. Timo soon realized he wanted to make a career of playing music, he started playing guitar at the age of nine. He would further his interest in art by studying Fine Art at Fullerton College. He honed his guitar playing skills during the Rhythm and Blues era of the early 60's, the instrumental surf-band era, the early days of Rock n Roll, as well as listening to varied Classical Guitarists, and the electronic experimentation's of the early '70s.

TIMO: “I started playing guitar with the idea of making a living with it at an early age, and I did just that. I played in night clubs full time for about 10 years, while teaching guitar at Fullerton Music for 4 years. My first band was called Train, that lasted about a year or so around 1968. Train didn't last too long”

Timo was in Hollywood in 1968 and was recording for MGM Records at the time with his band Train. This is where Timo met Terry Sheppard who was on leave from Vietnam and the two struck up a friendship – one that eventually would lead Sheppard to bring Symphonic Slam to Canada. 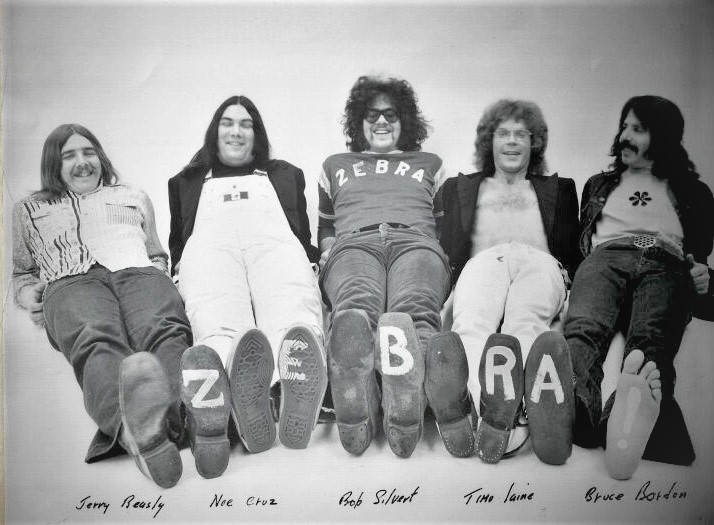 Zebra's 'Helter Skelter' was one of the final releases on the Miramar label, released in 1969. The B-side was an original by Bruce Bordon and Timo Laine titled 'Wasted'.

TIMO: “Zebra was together for about 5 years. Everywhere we played there would be a line around the building to get in. We were loved by the dance crowd, and the club owners kept us busy. Zebra opened for The Rolling Stones and The Byrds in the late ’60s in Fresno. We also played with Chuck Berry, B.B. King, Ballin’ Jack, Zephyr, Ike and Tina Turner and many other name acts, but I don’t remember them all. We were a full time club band, 5 nights a week, playing all over Southern California”.

TIMO: “We met Tony Cary at the Forum in Fresno, CA. He kept coming in every night and buying us drinks. Finally he said he was a Record Producer, and wanted to produce Zebra. Tony had a lot of industry contacts, and radio station friends like the Drake-Chenault radio station owners. He moved the band to the Marriott in Studio City, and started recording the act at Pat Boone’s Lion and the Lamb Studio. We were almost finished recording the album when we got a telegram that Tony had died. We were told he had overdosed. This was a huge loss for us. The album was never mixed or mastered, except for the single, it was done first. I don't know what happened to the master tapes. The band dissolved after that”.

And then came Space Rangers...

TIMO: “I had recorded the album with Zebra, but didn't have any master tapes. I joined Space Rangers with Neil Merryweather in late 1973. When I started with Space Rangers, I used the same material over. I had written most of the music for the new album, and played lead guitar. Neil wrote the words. We recorded at Capitol Records Studio and it was released by Mercury Records out of Chicago in 1974”.

Timo brought along Bob Silvert on keys from Zebra. His keyboards included a Chamberlin, which was the precursor to the Mellotron, except it was better. Neil brought in Timmy McGovern on drums.

The Chamberlin is a portable keyboard unit which contains prerecorded instruments on tape. Each tape is the recording of a single note. The tapes cover the complete chromatic scale of each instrument. This enables the player to control playing flexibility completely. Better than the Mellotron (also invented by Mr. Chamberlin) the Chamberlin utilizes better sound reproduction and quality.
Chamberlin Keyboards

In early 1974, when a conflict of interest in relation to actually getting paid came up. Timo left the Space Rangers along with Bob Silvert, the keyboard/Chamberlin player.

When members went their separate ways, Timo wanted to experiment with the larger than life operatic rock sound he had in his head - one that incorporated his influences, everyone from Wes Montgomery to Clapton, Beck, and Zappa to classical master Andres Segovia.

Timo's next venture was to create the origins of Symphonic Slam (not yet named)...